It’s a couple of chips and a few resistors and it sounds fantastic – very clean but also warm. I wanted to get the sound of Fairfield Circuitry’s Randy’s Revenge pedal (video demo) which is based on an AD633, and this gets there.

Slightly unhelpful demo, ringmodding the two outputs from a E350 oscillator against each other, one via a spring reverb. Starts clean:

Straighter demo where you can hear the warmth: Pianet piano against sine from Dixie oscillator, starts clean. Hum is from the Pianet

Here’s the schematic I used with a TL074 op amp in place of the op482. I tried the fully trimmed version on breadboard, but it didn’t seem to need it – v. good rejection carrier rejection without that part of the circuit. The ac/dc switching circuitry (C1, C2, R13, R14) can build built point-to-point on the switch itself and placed before the pots (p3, p4) rather than afterwards. I used 470nf polybox caps in C1, C2. A polarised electrolytic doesn’t work there.

The only hard thing is finding an AD633 chip – I bought mine on eBay from a seller called ‘Partcompany’ for £5.99. 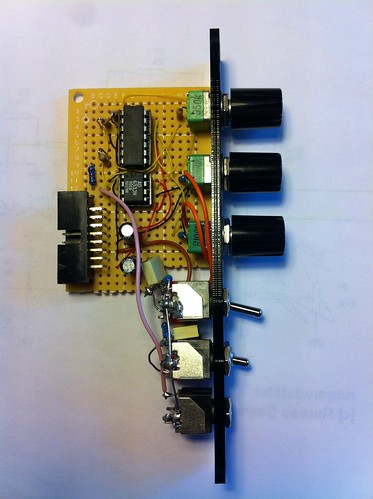 The panel was made from lasercut acrylic, cut by 4D Laser  – here’s the design as an Illustrator file: ringmod4hp.ai 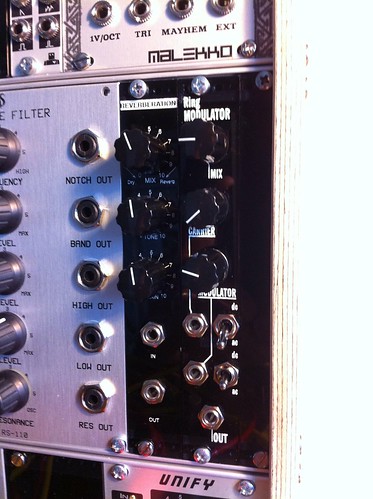 Getting started with DIY electronics: The Beavis Board
Getting the parts to build a Music Thing random sequencer